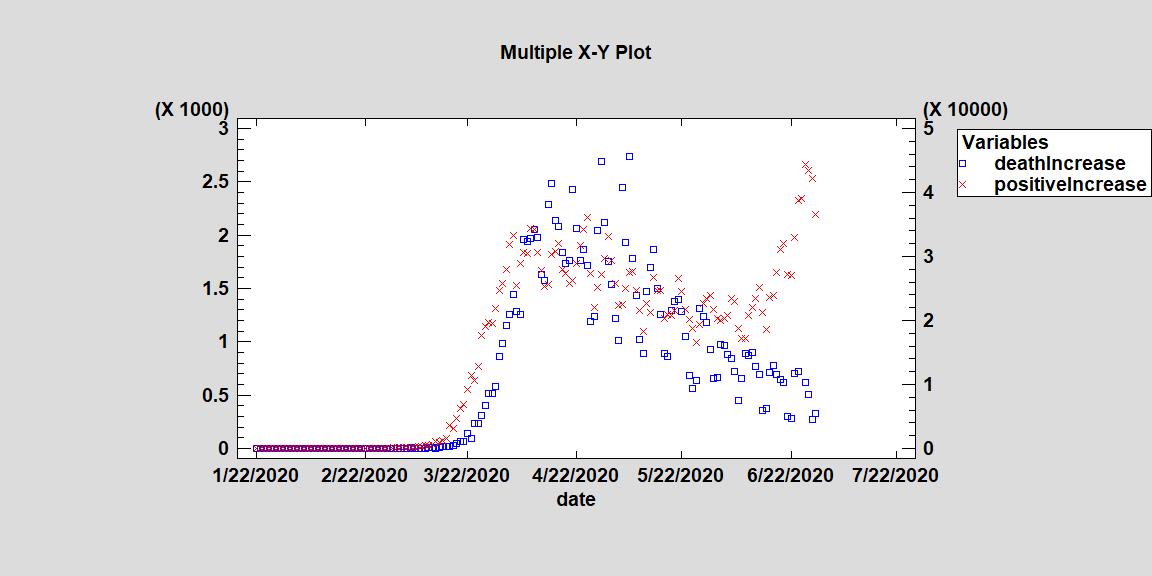 The Positivity Rate and amount of positive tests in the USA has been increasing (https://covidtracking.com/data). The Statgraphics Team wanted to determine if these increases are positively correlated with increases in deaths and if there is a lag between them. The first charts we look at were two time series plots comparing the positivity rate to daily deaths in the USA from COVID-19 and positive tests to daily deaths. If we look a Graph 1, there is a clear lag between the positive tests increases from COVID-19 and the deaths. The first substantial increase in positive tests started around 3/15/20 but the increase in deaths did not occur for another 7 days (around March 22). This makes sense because those infected with the virus typically take a few days to die. Look at Graph 2, the positivity rate begins to decline around 4/4/20 but the daily death total doesn’t begin to show any downward trend until eleven days later around 4/15/20. This again suggests there is a lag between positivity rates and daily death totals and may even be a positive correlation.

Graph 1. Time Series Comparing the Daily Death Total from COVID-19 in the US and the Positive Daily Increase

Graph 2. Time Series Comparing the Daily Death Total from COVID-19 in the US and the Positivity Rate

To determine if there was a positive correlation, we looked at the cross-correlation between daily deaths and positive tests/the positivity rate. We decided to use a partial data set starting around the decline in deaths of 4/14/20 to the present to not be influenced by the limited data we had in the beginning of the outbreak in the US. When looking at both cross-correlations, we can immediately see that the positivity rate is more closely correlated with daily deaths in America than positive increases. This would mean that increases in positive tests do not necessarily mean more deaths will occur. This virus has different mortality rates for different subsections of the population (in particular by age). If a large number of young people are testing positive, one would not expect a large increase in deaths. Neither chart passes the 95% confidence limits however there is positive correlation for both factors. The cross correlation between the positivity rate and deaths peaks first at plus 5 days and then again at plus 14 days. It begins to drop after two weeks but stays positive throughout our forecasting window suggesting that increases in the positivity rate is correlated with daily deaths in the USA. Look at Graph 4, we immediately see there is no positive correlation for the first 3 days but there is after the 5th day until the end of our graph. This suggests you would see an increase in the number of days 5 days after an increase in the number of positive tests. However, it is not statistically significant. The positive correlation does peak around positive 14 days suggesting the largest increase would occur two weeks after positive tests increases. In both graphs, the positive correlation continues after two weeks suggesting that people who have COVID-19 spread the virus to others and cause more deaths. It is interesting to note that there does appear to be weekly fluctuations due to reporting patterns or errors (such as under reporting on the weekends) as one can see peaks and valleys in the graphs.

Graph 3. Cross-correlations for Daily Deaths in the US from COVID-19 and the Positivity Rate

Graph 4. Cross-correlations for Daily Deaths in the US from COVID-19 and Daily Positive Tests

Graph 5. Time Sequence Plot for an ARIMA forecasting model for the Positivity Rate in the USA

Graph 6. Cross-correlations for Residuals of our Arima Model and the Positivity Rates at Daily Intervals

Graph 7. Time Series Plot for the Daily Number of Deaths in the USA from COVID-19 (removing outlier death total from 6/25/20)