Searching the Internet, I have found many interesting examples of this type of testing: comparison of a generic drug to a brand-name drug, comparison of genetically modified feedstuffs for livestock to standard feedstocks, assessment of health disparities in vaccination coverage among different groups of people,  comparison of implicit and explicit measures of self-esteem, comparison of measurement systems, evaluation of changes in manufacturing equipment, comparison of different instruments in sensory and consumer research, and many more.

Many applications have to do with demonstrating "bioequivalence", which is defined by the FDA as: "the absence of a significant difference in the rate and extent to which the active ingredient or active moiety in pharmaceutical equivalents or pharmaceutical alternatives becomes available at the site of drug action when administered at the same molar dose under similar conditions in an appropriately designed study." Or more simply, the 2 drugs have equivalent effects. Of course, equivalent doesn't mean exactly the same. Often it means that a 95% confidence interval for their relative difference lies completely within the interval from 80% to 125%.

A very common experimental design for demonstrating equivalence or noninferiority is a 2x2 crossover study. In such a study, 2 treatments (A and B) are administered to a group of subjects. Half the subjects get treatment A followed by treatment B, while the other half get treatment B followed by treatment A. Administration of the treatments is assumed to be separated by enough time that the effect of the first treatment does not carryover and affect the outcome of the second treatment, an assumption which must be tested as part of the analysis. You'll find a special procedure in Statgraphics 18 for analyzing these types of studies.

As an example consider the following data from a study published in Chow and Liu (2009): 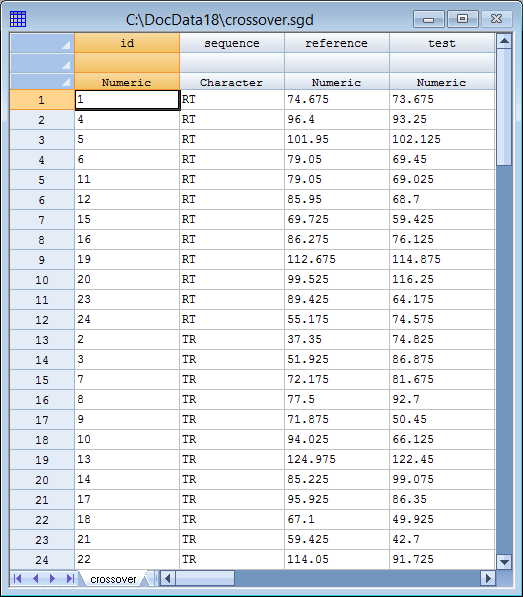 The figure below plots the measurements for each of the 24 patients. 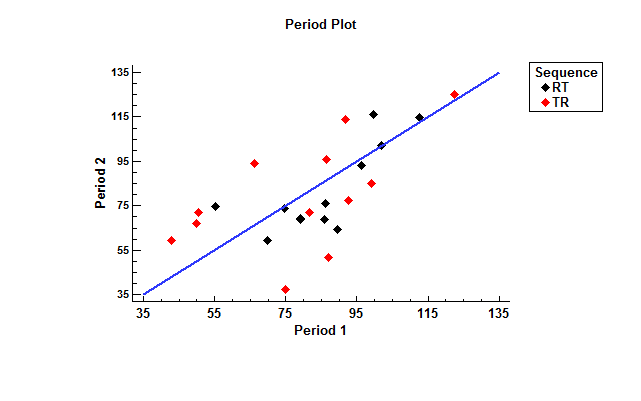 Our alternative hypothesis (the one we wish to demonstrate) is that the ratio is within the indicated range:

Note that this is basically the reverse of a standard hypothesis test in which the null hypothesis rather than the alternative hypothesis would indicate no difference between the 2 means.

The best way to understand the statistical model for this data is to examine the expected values for patients in each sequence during each time period as shown below:

where S is a sequence effect, P is a period effect, and λR and λT are carryover effects of the reference and test formulations, respectively. A carryover effect is the effect of the treatment from the previous time period on the response at the current time period. In the above table, the effects are shown as additive. Alternatively, it is sometimes assumed that the effects are multiplicative, in which case there are 2 choices: (1) an additive model may be used to analyze logarithms rather than the original measurements, or (2) Fieller’s theorem may be applied using the method outlined by Locke (1984).

If the means of the two formulations are estimated by averaging the results of all patients when given that formulation, the difference between the treatment means is not aliased with either the sequence or period effects if the design is balanced (same number of patients in each sequence). However, the difference between the means is aliased with the crossover effects unless the crossover effects of the test and reference formulations are equal. Consequently, when performing such a study, an attempt must be made to separate the administration of the 2 formulations by enough time such that the effect of the formulation administered first has dissipated (a washout period).

Statgraphics 18 contains a new procedure for analyzing the results of 2x2 crossover studies. Is it accessed by selecting Compare on the main menu and then choosing Equivalence and Noninferiority Tests – 2x2 Crossover Study. The names of the columns are entered on the data input dialog box as shown below: 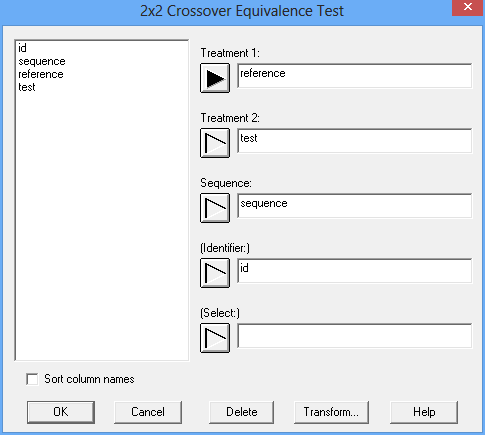 The Analysis Options dialog box is used to specify the hypotheses to be tested: 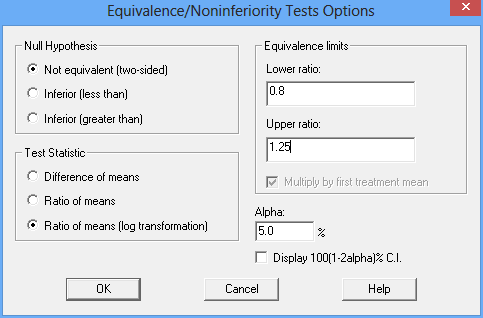 The settings shown above indicate that a two-sided equivalence test is desired, based on the ratio of the means. Equivalence may be asserted if the ratio is between 0.8 and 1.25 using an α-level of 5%. The analysis will be based on an additive model for the logarithms of the recorded data.

Several tables are produced by the procedure, the first of which shows the results of fitting the statistical model:

It is also useful to plot the estimated means of the test and reference formulations during the 2 periods: 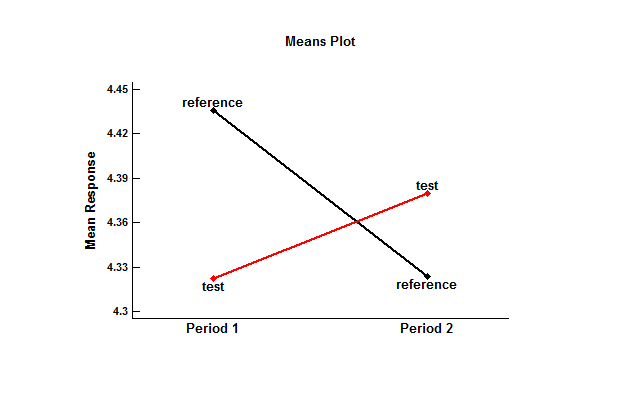 When applied first, the mean of the test formulation was slightly lower than the mean of the reference formulation. When applied second, the test mean was slightly higher. The results of a standard t-test of the difference between the means, shown in the previous table, did not reject the hypothesis that the means were identical. However, such a test does not demonstrate equivalence.

The second part of the Statgraphics 18 Analysis Summary shows the results of the TOST procedure:

It is also helpful to plot the results. The plot below shows a 95% confidence interval for the ratio of the test mean to the reference mean: 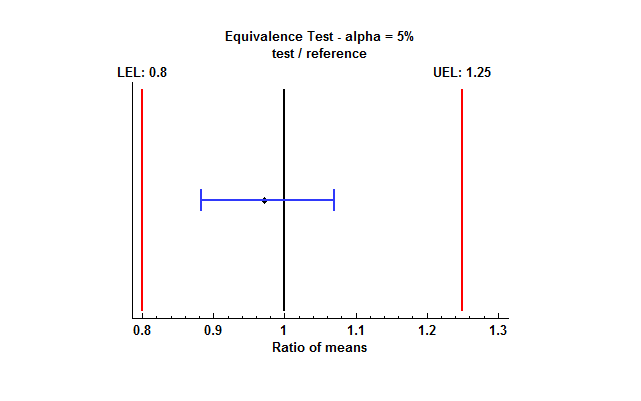 When equivalence testing was first developed, it was common practice to display a 90% confidence interval for the difference between the means using the formula

sp is the pooled standard deviation of the within-subject differences in the 2 sequences, and ν is the degrees of freedom associated with sp. In recent years, it has become standard practice to calculate a 95% confidence interval instead using the formula

Either approach has the property that whenever the TOST procedure indicates that the means are equivalent, the calculated interval will be completely within the limits. Statgraphics 18 applies the second formula by default, although an option on the Analysis Options dialog box allows the analyst to use the first formula if desired.

In some cases, the goal of the analysis is not to show that a test and reference mean are “equivalent”, but only to show that the test formulation is at least as good as the reference formulation. In such cases, only one of the 2 one-sided tests described above in the TOST section needs to be performed. For example, if we wish to demonstrate that the test mean is at least 80% as large as the reference mean, we would specify hypotheses such as 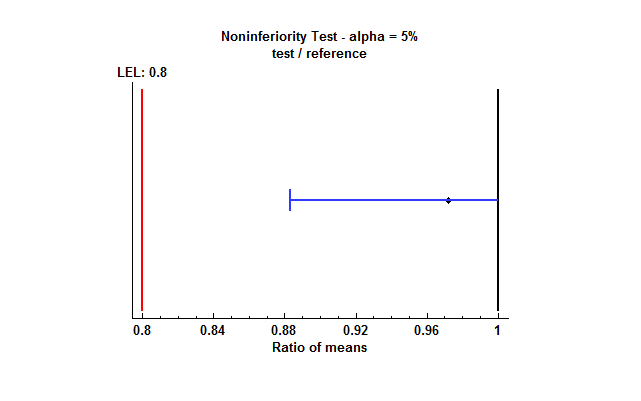 There's an excellent discussion of these topics in the Journal of General Internal Medicine which you can read online titled Understanding Equivalence and Noninferiority Testing. A thorough discussion of crossover trials is given by Li (2014). I've also recorded 4 videos on the topic which you will find listed on our Instructional Videos page.

Schuirmann, D.J. (1987). “A comparison of the one-sided tests procedure and the power approach for assessing the equivalence of average bioavailability.” J Pharmacokinet Biopharm 15: 657-680.