The next build of Statgraphics Centurion Version 17 (scheduled to be released in early July) contains a new operator named INDEX which allows you to retrieve values from a data column at specific locations. For example, the expression INDEX(X,6) gets the value from column X located in row #6. If K is a second column containing a collection of indices, then the expression INDEX(X,K) will return the data values at each of the indices.

The motivation for INDEX came from an analysis of data I was doing for a “skins” game we play in our local golf league. During the round, if anyone in the league does better on a particular hole than everyone else, they get a skin for that hole. I took all of our rounds since the beginning of the year and created a column called SKINS with the hole number for every skin that was awarded. That gave me a column of 179 numbers between 1 and 18. I then did a tabulation of the column and ran a statistical test to determine whether skins were awarded significantly more often on some holes than others (they weren’t).

A second test I wished to perform was whether skins were awarded at different rates on par 3, par 4, and par 5 holes. To do this, I needed to count the number of skins for each value of par. I soon discovered that there wasn’t an easy way to do that. So we created the INDEX operator. This let me create a new column named PAR which had 18 values in it giving the par for each hole on the golf course. I then tabulated the data using the expression INDEX(PAR,SKINS) which gave me exactly what I wanted.

Here’s a piechart showing the tabulation: 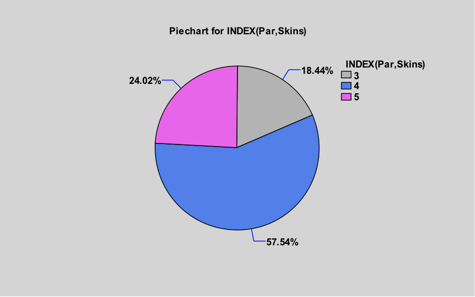 I then used the Frequency Tables procedure to compare the observed distribution of skins to a multinomial distribution with probabilities (4/18,10/18,4/18). You can see the results below: 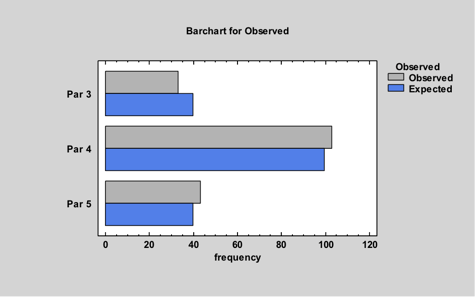 The chi-square test indicates that the observed distribution does not deviate significantly from that expected if there were no difference in the chance of getting a skin on par 3, par 4 and par 5 holes. I also did a comparison of skins on the front nine versus the back nine and using the handicap assigned to each hole. More on that if anyone is interested.